St. Patrick’s Day is a holiday celebrated annually around the world on March 17. It’s held in honor of Patrick, the patron saint of Ireland. The holiday dates back all the way to the 17th century, beginning as a feast day that has since evolved to become a festive event full of leprechauns, people wearing green, and indulging in everything Irish. Although Ireland sure knows how to throw a party, some other places in the world are giving the Irish a run for their money. These are the most unusual St. Patrick’s Day celebrations and traditions around the world.

Chicago, Illinois, has gone big on St. Patrick’s Day for more than 50 years, with their most well-known tradition being coloring the Chicago River bright green. Of course, they do this in an environmentally friendly way. 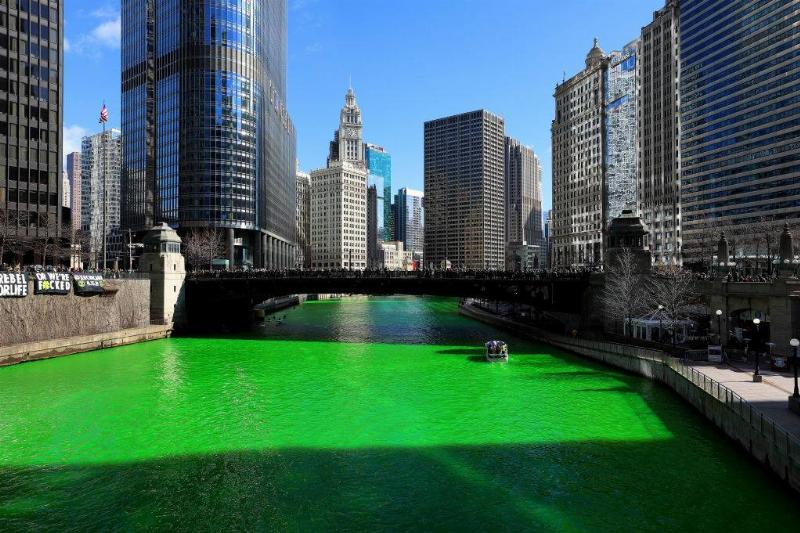 Each year, more than 40,000 people from across the country come to the Windy City to watch the spectacle. Then even more people attend the St. Patrick’s Day parade and all of the festivities that follow.

Can you guess which city has the largest St. Patrick’s Day parade in the world? 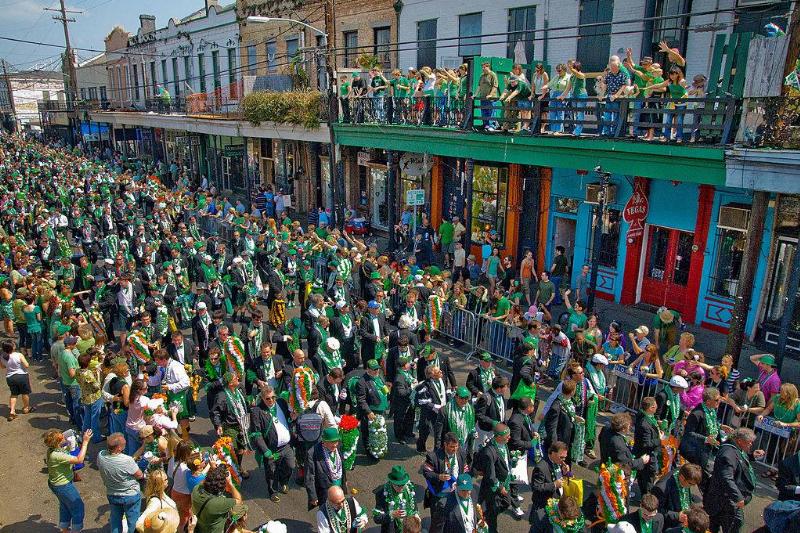 Debatably one of the biggest party cities in the world, New Orleans is the place to be to cut loose on St. Patrick’s Day. On the holiday, thousands of people crowd into the Irish Channel neighborhood for a huge block party that typically breaks out into a vegetable food fight.

The food that is used the most is cabbage, because it is the vegetable that replaced the potato during the Irish Potato Famine, making it a staple of Irish food.

Ise, Japan Gets Into The Spirit 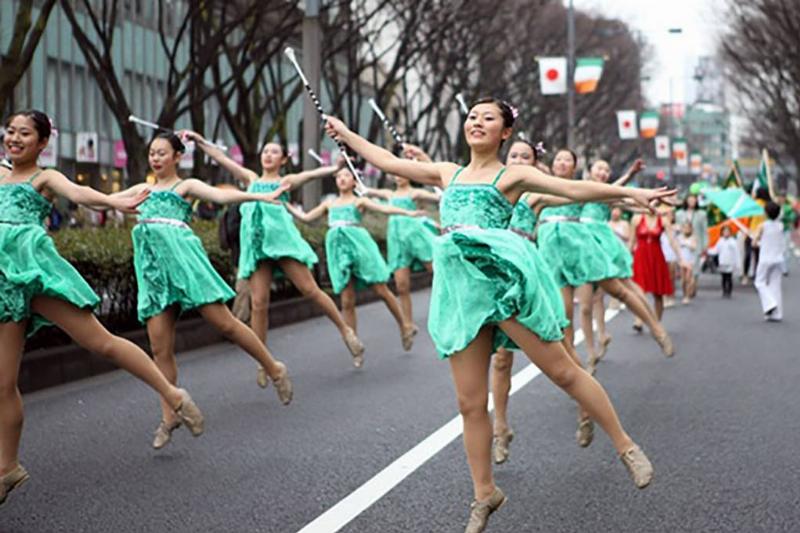 It might surprise some to learn that there is actually a St. Patrick’s celebration each year in Ise, Japan. It takes place at the Ise Shrine, a place dedicated to the Shinto religion’s sun goddess Amaterasu.

A parade is held, in which flags from both Ireland and Japan are flown while residents of the town play bagpipes, perform Irish dances, and dress up as leprechauns. More than 500 individuals participate in the parade, including the Irish ambassador to Japan. 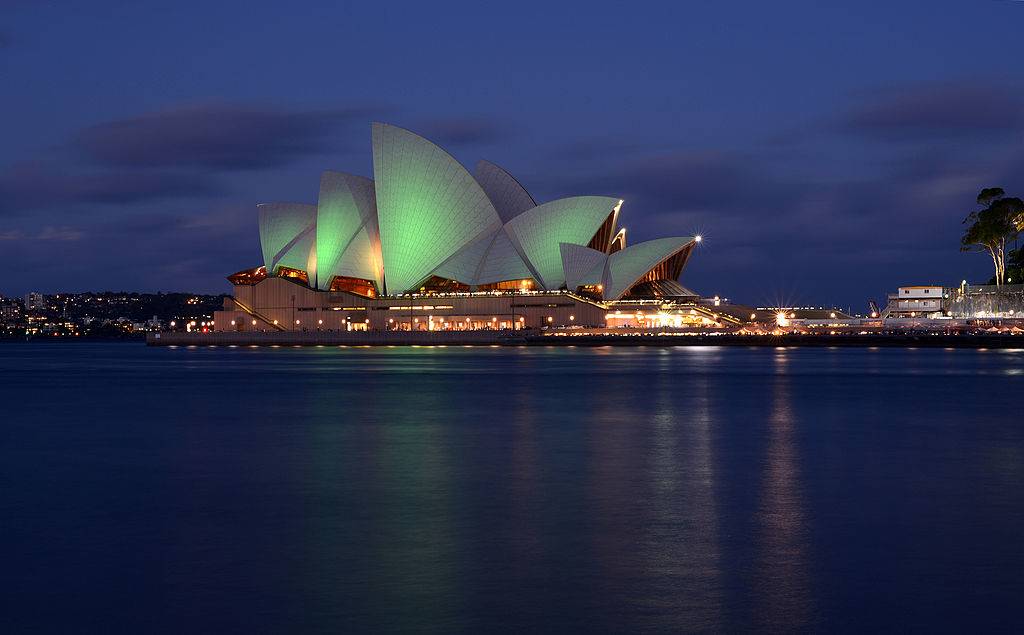 According to the Australian Embassy to Ireland, some 30% of Australians have some form of Irish heritage, with more than 30,000 of the country’s residents actually born in Ireland. So, it’s not unusual that at least one part of the country would celebrate the holiday.

Each year, a huge celebration is held in the form of the Queensland Irish Association Parade, which acknowledges the Irish people who were sent to Australia to help build the country.

New York, New York Has The Biggest Parade In The World 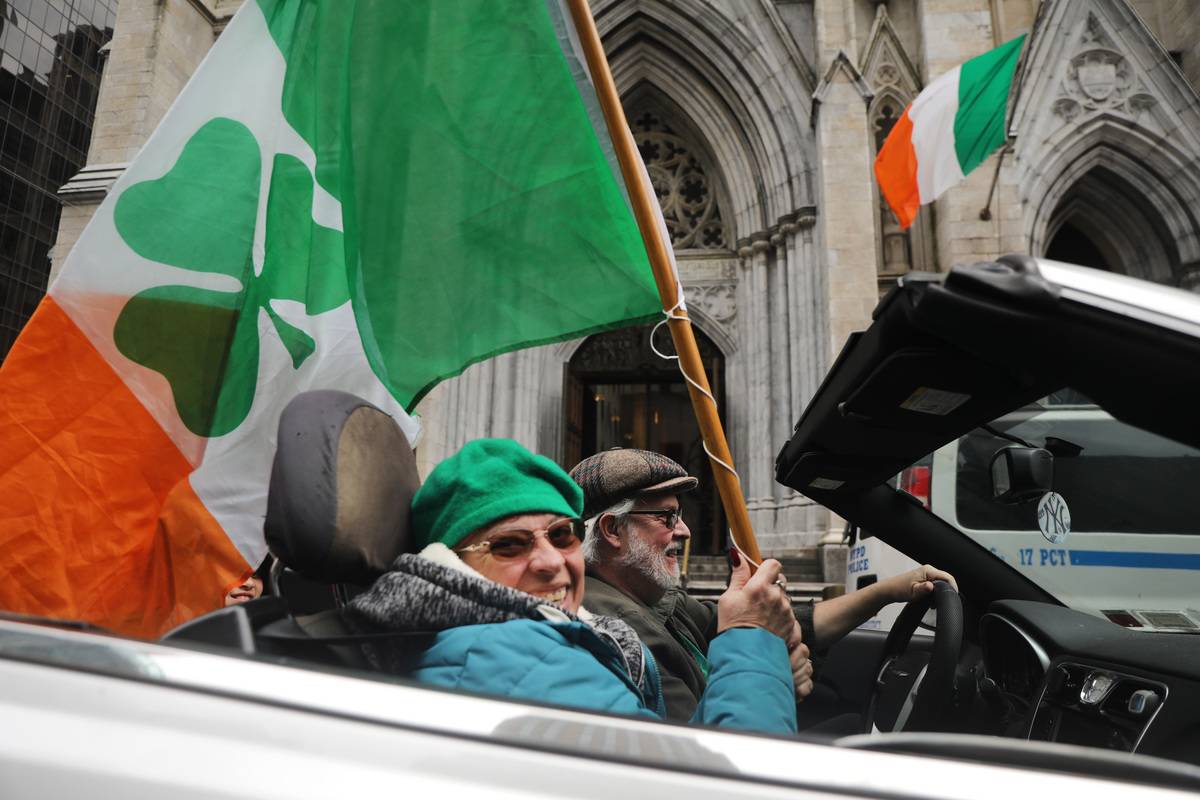 New York, New York, is the place to be for just about any holiday, especially when it comes to St. Patrick’s Day. It’s estimated that there are more than two million people in attendance at what is considered to be the largest St. Patrick’s Day Parade in the world.

Typically, the parade lasts around six hours with hundreds of thousands of dancers, musicians, and other performers. In addition, the Empire State Building is also lit up green! 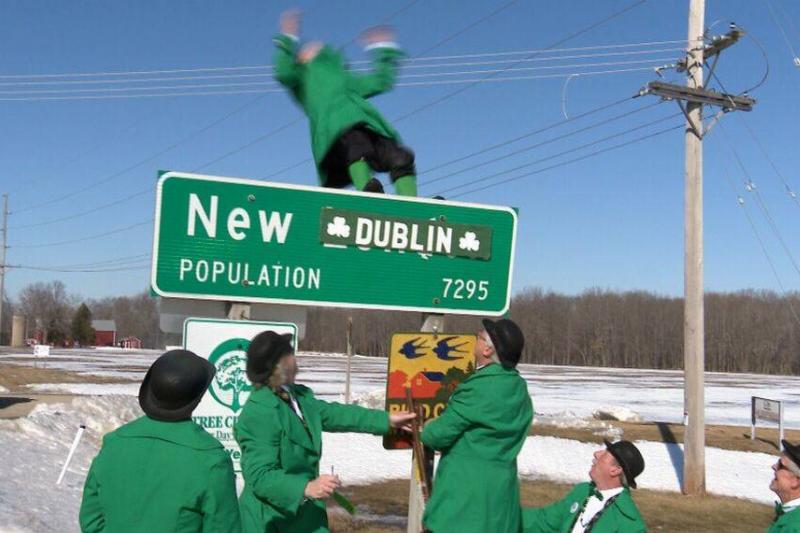 Although New London, Wisconsin, was initially settled by German immigrants, the city saw a massive increase in its Irish population during the 19th century.

On St. Patrick’s Day, there is a group known as the Shamrock Club that goes around changing signs to read “New Dublin,” a tradition that has gone on for more than 20 years. There’s also a parade that brings a crowd of over 30,000, pretty impressive considering that New London only has 7,000 residents.

Montserrat In The Caribbean Sea Celebrates It As A National Holiday 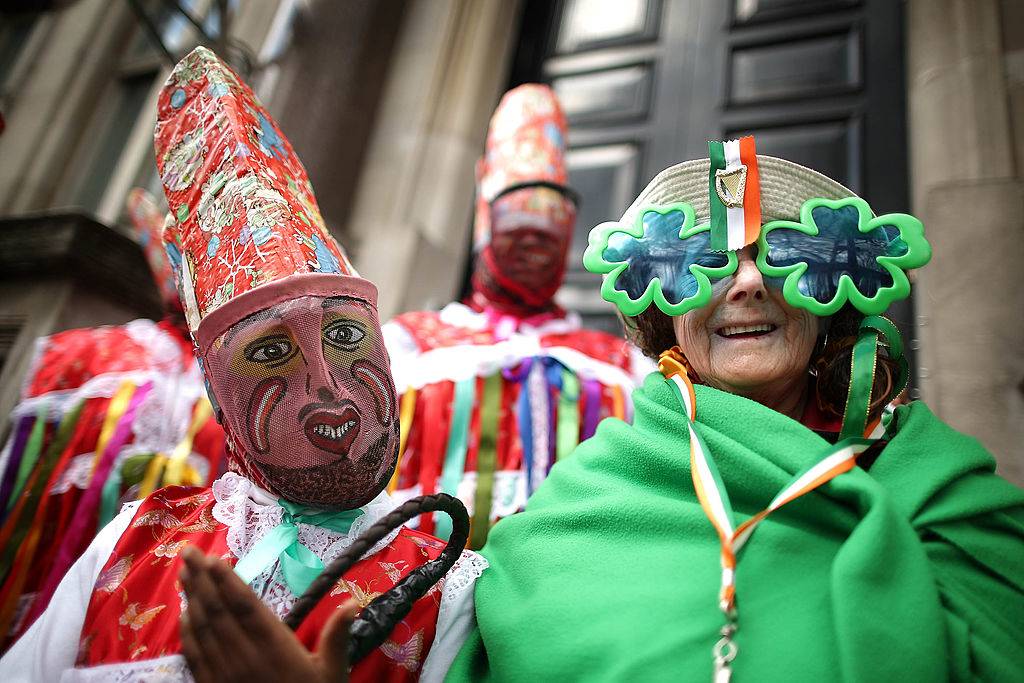 Montserrat is the only other place in the world outside of Ireland that celebrates St, Patrick’s Day as a national holiday.

Jennifer Johnson, an island spokeswoman, says, “What makes Montserrat so unique is it has an equally Irish and African heritage.” So, on March 17, the citizens hold a series of Irish celebrations. The day also coincides with the anniversary of a 1768 slave uprising, making it a “double holiday.”

Keep going to see which celebration is out of this world.

Montreal, Canada Has Been Celebrating The Holiday For Hundreds Of Years 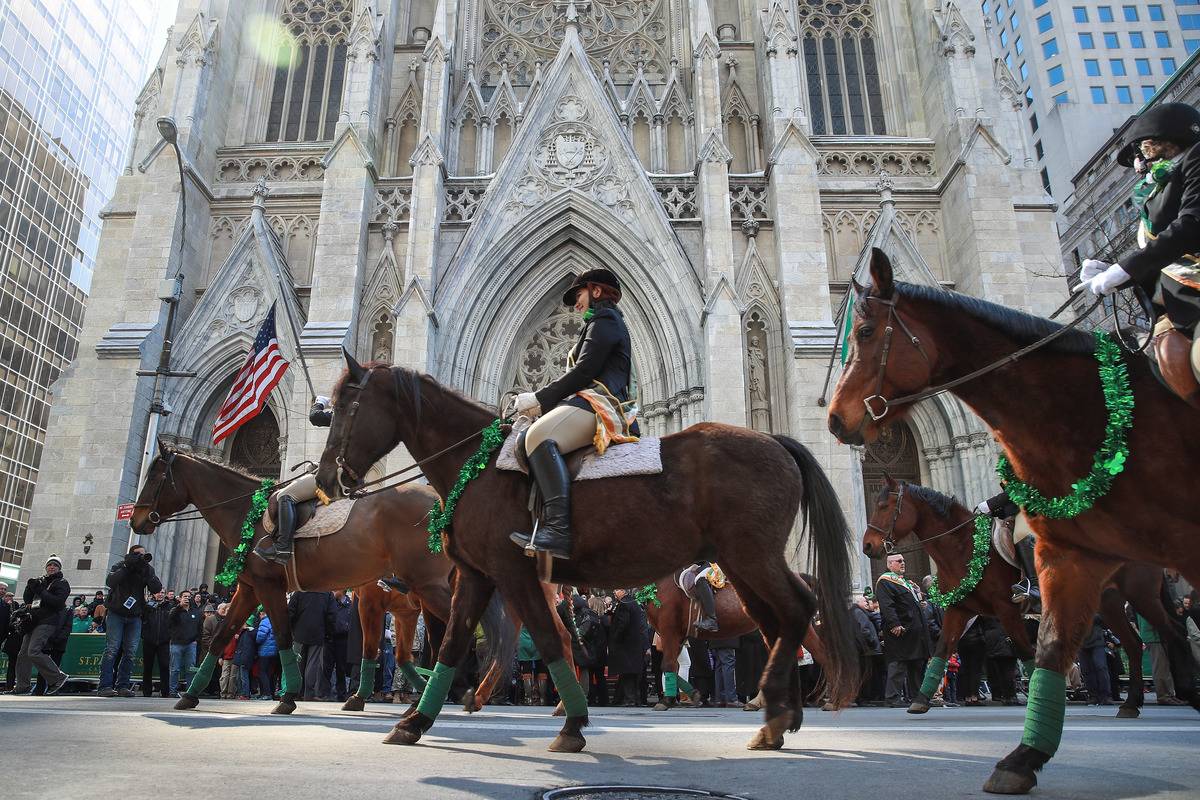 The city of Montreal, Canada, has celebrated St. Patrick’s Day every year since 1824. This isn’t any small-town celebration either, but it includes a parade complete with dancers, bagpipes, floats, and more. People always attend it no matter the weather conditions.

The city is also sure to include their famous giant blow-up Saint Patrick that makes its rounds around the city streets for no less than three hours! Afterward, there’s also a fair share of partying that follows. 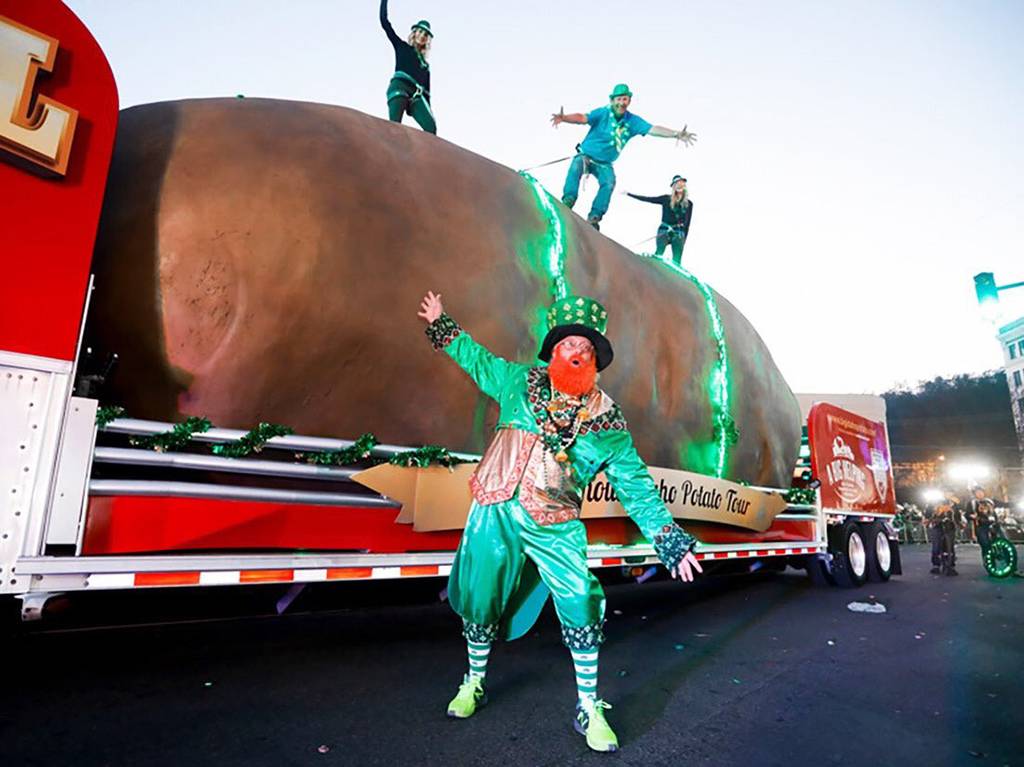 In Hot Springs, Arkansas, the world’s shortest St. Patrick’s Day parade is held each year. It’s so short because it only spans the 98-foot-long Bridge Street, which was once named the “Shortest Street in the World” by Ripley’s Believe It or Not.

The parade typically includes a mix of characters ranging from Irish Elvis impersonators to the self-proclaimed “World’s Oldest Leprechaun,” and has events such as a wedding ceremony in under a minute and a kissing the Blarney stone competition in which the winner receives $100.

Banwen, Wales Believes Their Town Is Where St. Patrick Was Born 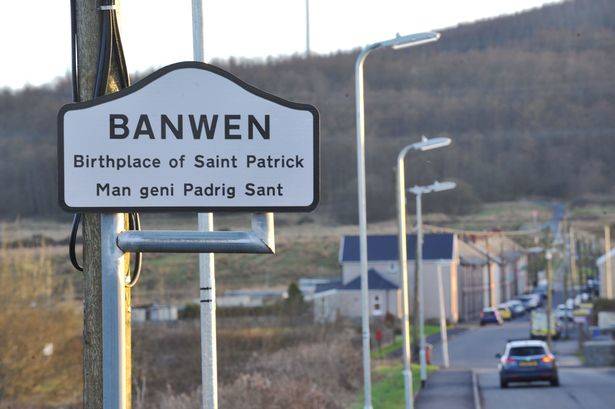 According to the Banwen & District History Club in Wales, England, history has it all wrong. They say that the patron saint of Ireland wasn’t from Ireland at all, but Wales! The story goes that St. Patrick was born Maewyn Succat in 385 AD. He was kidnapped by pirates as a teenager and soon after sold into slavery in Ireland.

Each March 17th, the history club has a parade down Roman Road in the town to celebrate what is supposedly St. Patrick’s true birthplace.

Buenos Aires, Argentina Has More Irish Heritage Than You Might Think 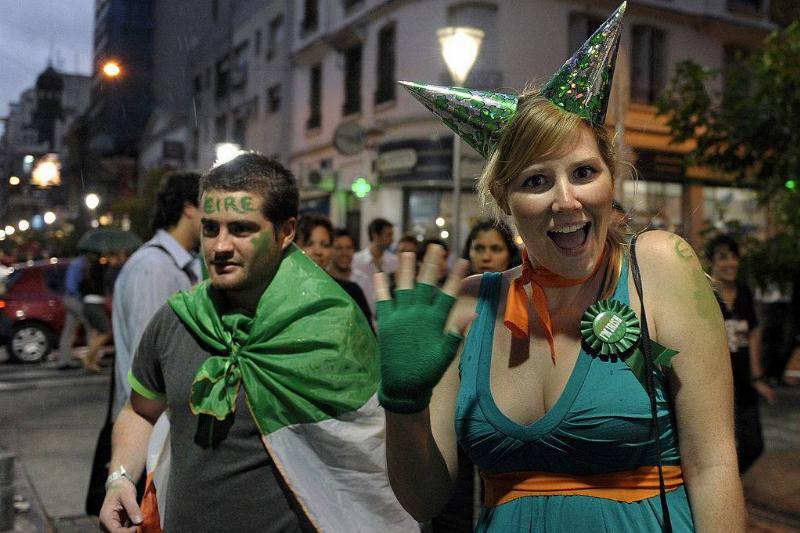 Buenos Aire, Argentina, actually has one of the most significant Irish populations in the world. Because of this, the city goes all out for the holiday. A parade is held down several of the biggest streets, including the famous Avenida de Mayo.

On top of the parade, there are also concerts, live dancing, and a plaza filled with over 50 food and drink vendors. Plus, at the end of it all, there is an annual costume contest.

London, England Goes All Out For Its Neighboring Country 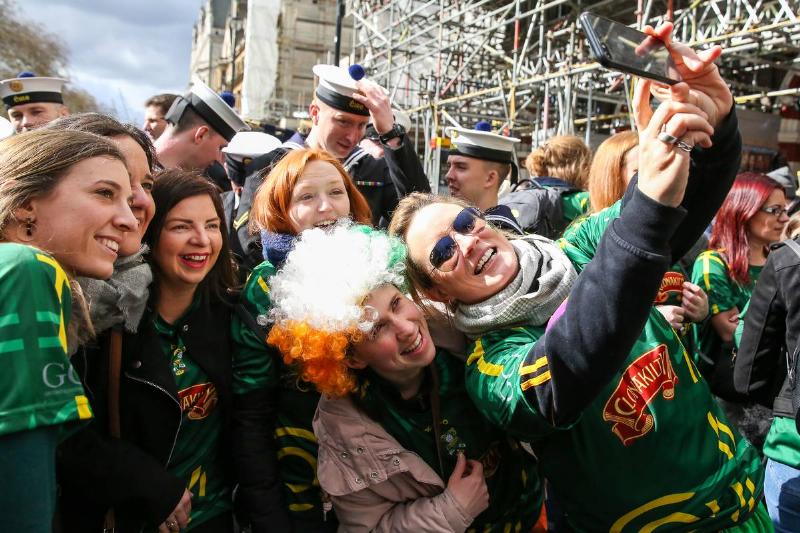 London, England definitely shows its pride on St. Patrick’s Day. Each year, a massive parade is held that usually begins in Piccadilly Circus and winds through the city, passing by some of the most famous landmarks such as Trafalgar Square.

The Mayor of London’s St. Patrick’s festival is the largest celebration in the city. Other activities and performances are also held across the city, with the Irish pubs receiving a massive influx of party-goers. 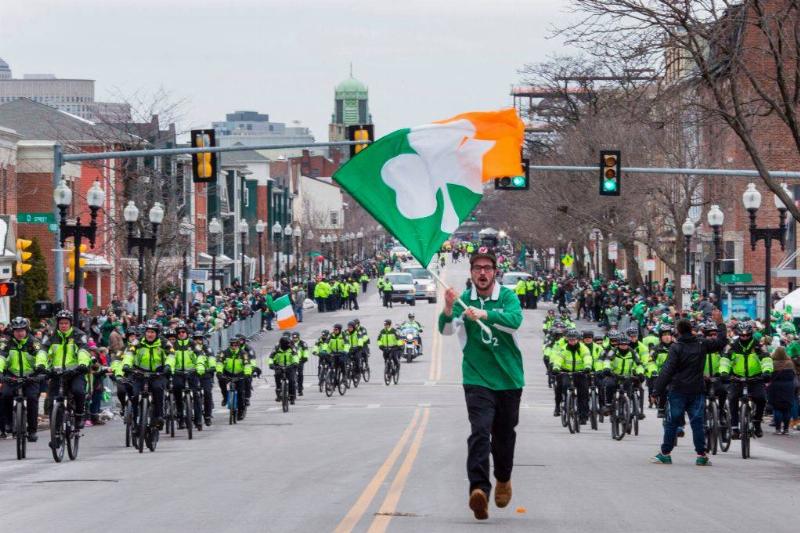 Boston, Massachusetts is one of the most densely-populated Irish cities in the world outside of Ireland itself. This is proven each year on March 17, when over one million people flock to the city to celebrate their Irish heritage.

In particular, Boston is known for providing a huge parade and numerous live concerts. In this city, by no means is St. Patrick’s Day just a one-day event.

The International Space Station Once Got Into The Spirit 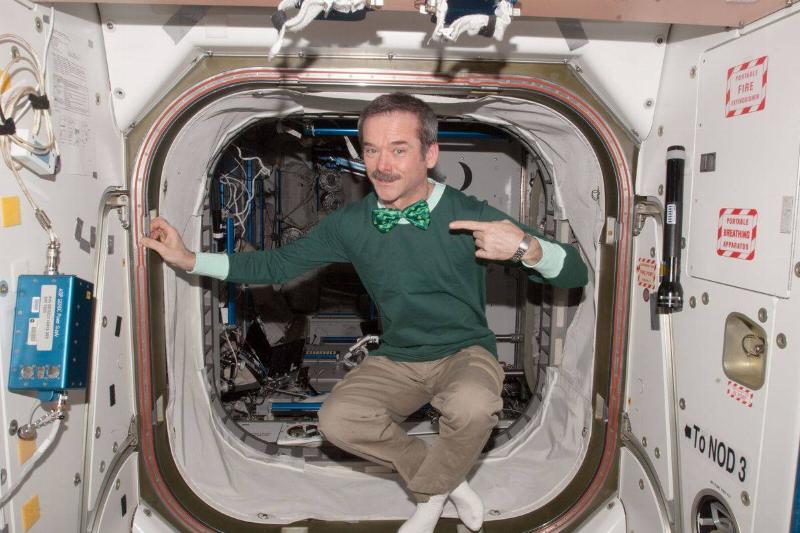 Although St. Patrick’s Day may be celebrated all over the world, the holiday has even been celebrated in space! In 2013, a Canadian astronaut wore green and took a picture of Ireland from the International Space Station.

He then posted a video online of himself singing “Danny Boy.” It turns out, he was inspired by another astronaut that once performed an Irish flute song while in space to commemorate the holiday. Now that’s unique! 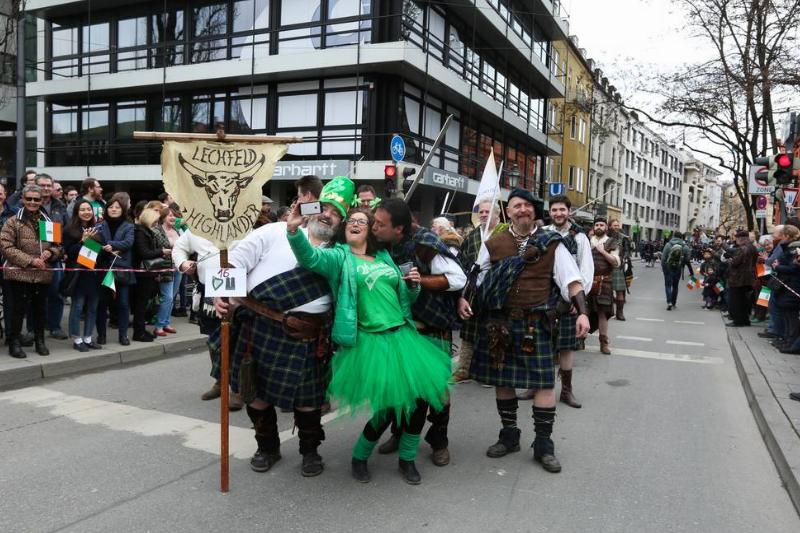 Germany knows how to party, and this is no different when it comes to St. Patrick’s Day. During the celebration, the city shuts down Leopold Street for a huge parade that rivals many around the world.

More recently, the holiday spans for multiple days with an Irish fair on one day and the parade on another. There is also a street food festival packed with traditional Irish eats and drinking plenty of beer is encouraged.

Portland, Maine Celebrates With A Cold Swim And Free Breakfast

On March 17 every year, many of the citizens of Portland, Maine (as well as visitors) kick off St. Patrick’s Day by jumping into the frigid waters of the Atlantic Ocean at no later than 5:30 am.

This is all for a great reason, as it is a charity event with all of the proceeds going to a good cause. Plus, all those who participate are greeted afterward by a free Irish breakfast, live music, and a raffle. 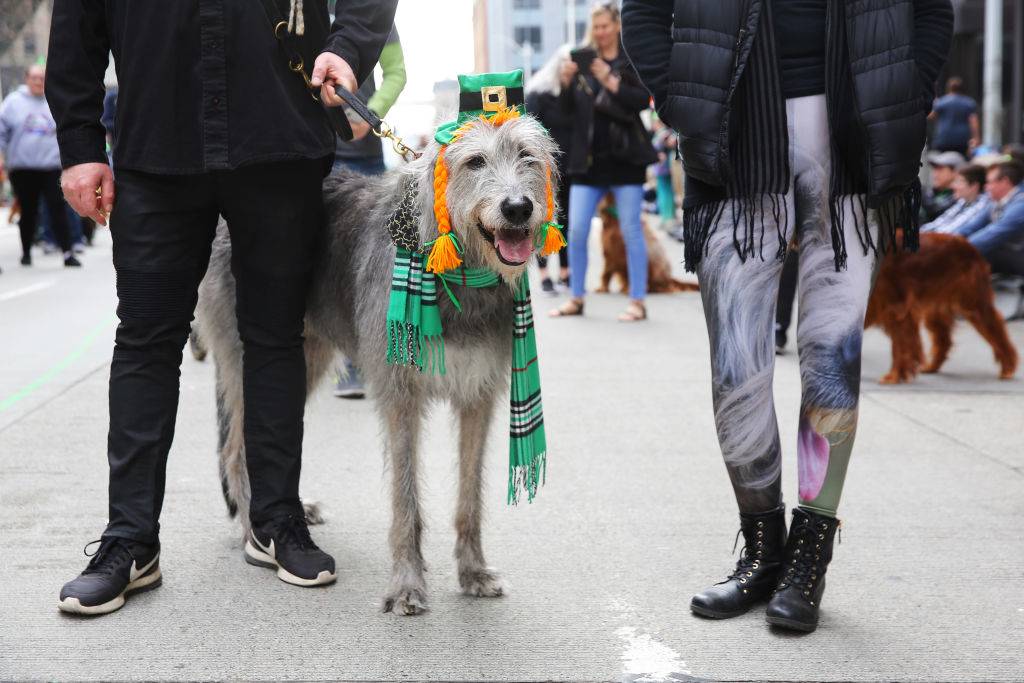 Part of the legend of Saint Patrick is that he managed to “banish” all of the snakes from Ireland. But where did they go? Apparently, to San Francisco, California. The city incorporated this legend into their celebration, in which people bring their snakes (and other pets!) to witness the parade.

There have even been snake races in the past to see once and for all who had the fastest snake in all of the Bay Area.

In the United States, people like to do everything big, especially when it comes to holidays and parades. Yet, that’s not the case for the town of Enterprise, Alabama. For over 25 years, Enterprise has boasted the smallest St. Patrick’s Day parade in the world.

The parade consists of one person holding an Irish flag and carrying a pot of gold as they walk past the town courthouse and the town’s monument of a Boll Weevil. It may not be much, but it gets the job done.

O’Neill, Nebraska, Is Proud Of Their Shamrock 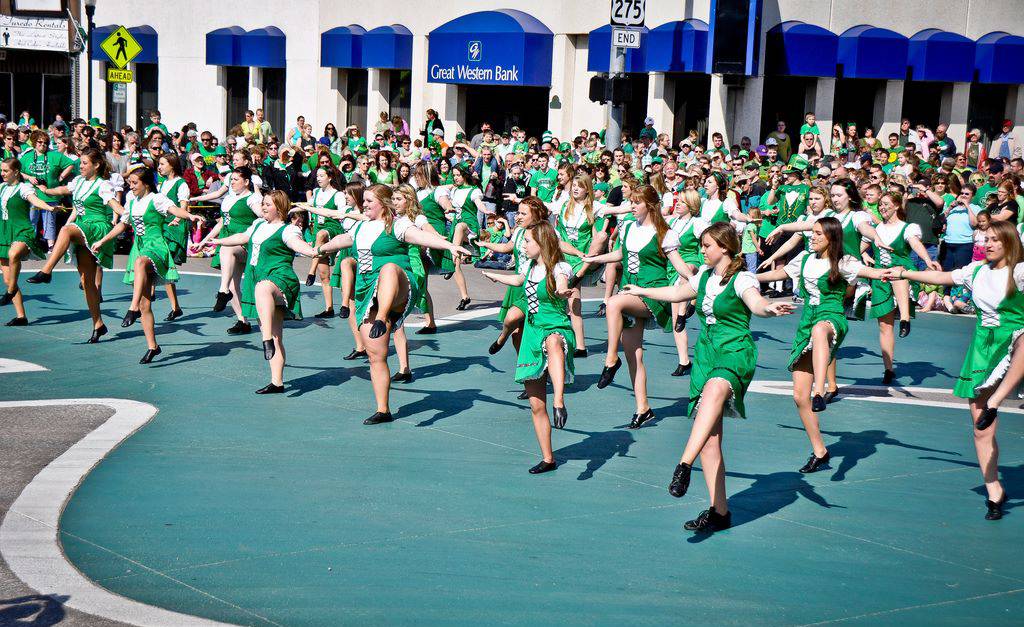 St. Patrick’s Day is taken seriously in O’Neill, Nebraska. The town is named after John O’Neill, a native Irishman, a veteran of the Civil War, and an advocate for Irish immigration.

During the holiday, the town gets together for a series of fun events including a fish fry, a Children’s Literature Festival, and more. Yet, what the town is really known for is its giant shamrock. At the intersection of Route 281 and Highway 20, the world’s largest shamrock is painted on the road.

Brussels, Belgium Always Dresses Up A Statue For The Holiday 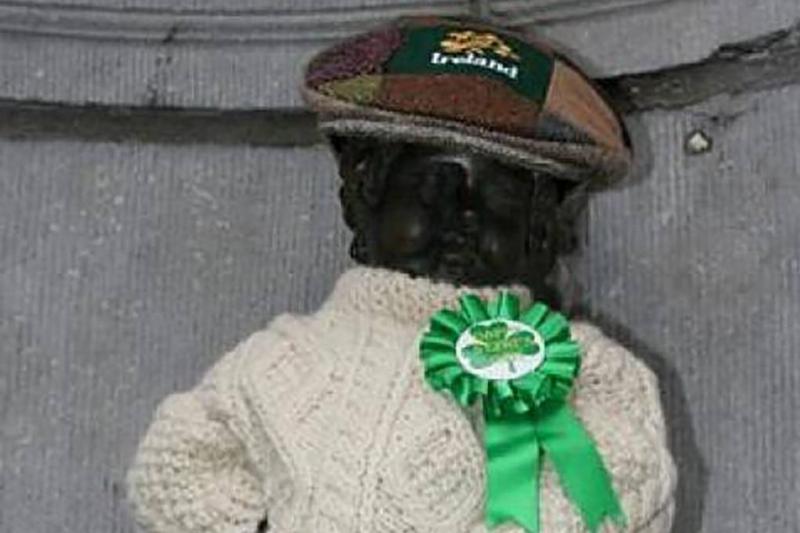 In Brussels, Belgium, St. Patrick’s Day means that the Manneken Pis, a famous statue, is dressed in a festive sweater. However, the real festivities take place in Parc du Cinquantenaire, which features events such as classic Irish sports, food, shows, and plenty of activities for children.

One of the event’s main attractions are the professional dancers that perform traditional Irish jigs and encourage the rest of the crowd to join in.